Gangotri is a Hindu pilgrimage site, located in the Uttarakhand state of India. It is the site where the Ganges River crests from an ice-scoured basin and flows southward to meet the Yamuna River at Triveni Sangam, where they are now considered to be one river called Ganga. Gangotri is one of four sites in India's Chota Char Dham pilgrimage circuit, which are among the holiest shrines for Hindus. The birthplace of the Hindu deity Ganga Maa has been venerated by Hindus for centuries. The "Ganges" name originates from the Sanskrit word "Ganga", which means "that which descends".

Gangotri is a holy place for Hindus, located in Uttarakhand. It is considered to be the origin of the Ganges River. Pilgrims come to Gangotri to bathe in the holy waters of the River 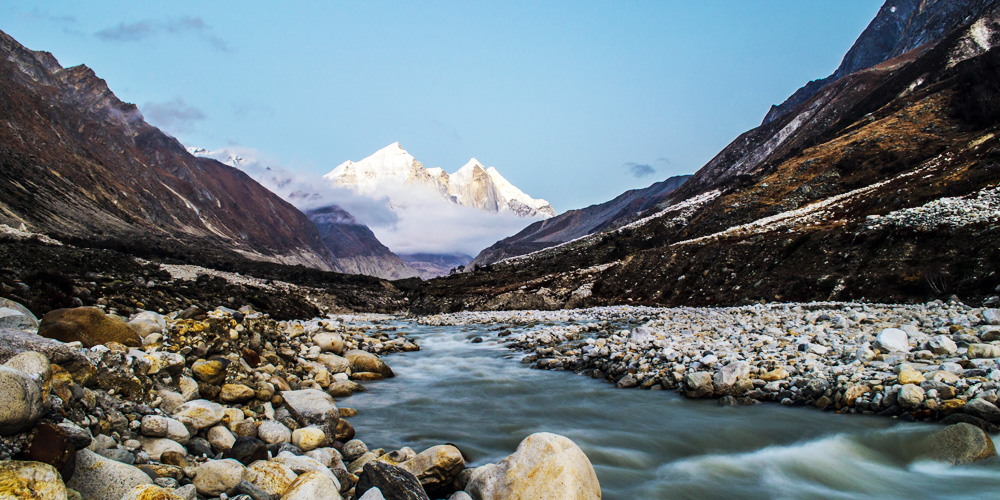 The Ganges purify themselves spiritually. The Varuna River, which originates at Gangotri, is believed to have an eternal connection with Lord Shiva and it is believed that prayers will be answered if they are made here.

Gangotri is a holy landmark for Hindus, with many religious rituals being performed there, with most people bathing in the Ganges River. It is also a popular tourist destination. In Hinduism, Gangotri is considered to be one of the seven most holy places on Earth. Every 12 years, it hosts the Kumbh Mela festival. Gangotri is one of four sites along the Himalayan Char Dham pilgrimage circuit that are combined into the "Chota Char Dham" pilgrimage site.

Gangotri is a holy place situated on the banks of the Bhagirathi River. It is the origin of the Ganges River and is an important Hindu pilgrimage site. The area around Gangotri contains many temples, ashrams, and Gangotri places that are worth to visit on your trip for a beautiful destination.

Gangotri, India is a holy place of pilgrimage for Hindus. The river Ganges flows from the glaciers in the Himalayas before cascading down to the plains at Gangotri. The temple complex at Gangotri is sacred and holds many temples, maths, and ashrams. It also has a number of other attractions such as gardens and waterfalls. Many people to visit this holy town for the serenity that it provides. Gangotri offers an opportunity to experience nature and spirituality in its purest form.

Here are some of the places to visit in Gangotri:

Gangotri is one of the holiest Hindu pilgrimages. It is a place where Hindu mythology states that "Ganga descended from heaven and merged into the Earth".

The best time to visit Gangotri is when the Ganga is in full flow during late November or early December when it's freezing cold in Gangotri.

Gangotri's open every year from May to November for you to visit. The best time to visit Gangotri is May-June and September-October as the weather is mostly pleasant during those months. Gangotri remains cold throughout the year, so it's best to avoid going during the monsoon from July to August as landslides are a common occurrence. 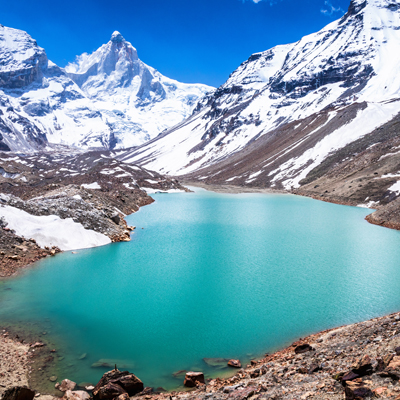 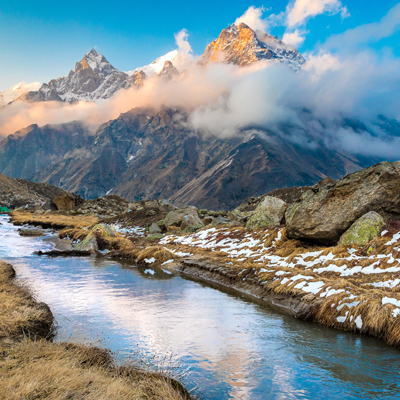 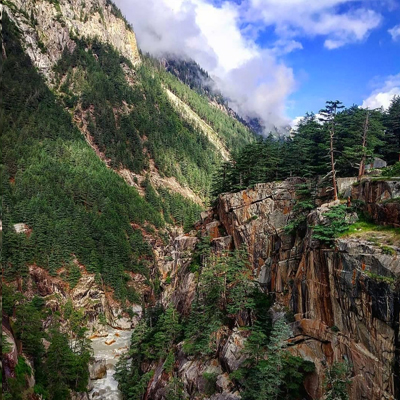 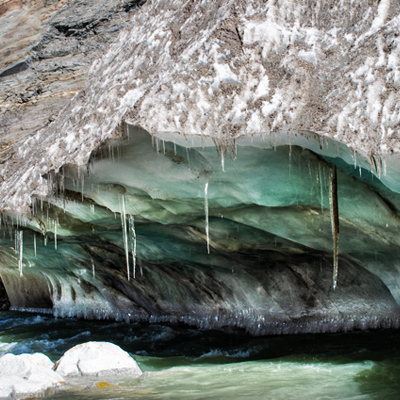 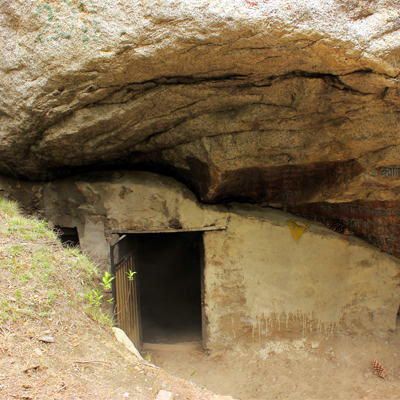 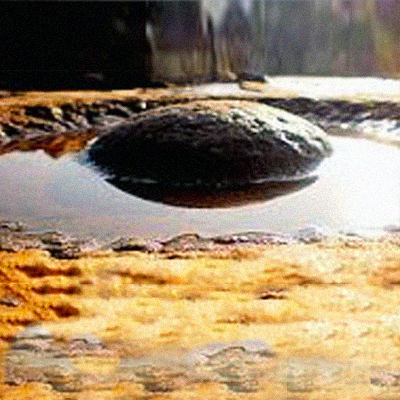 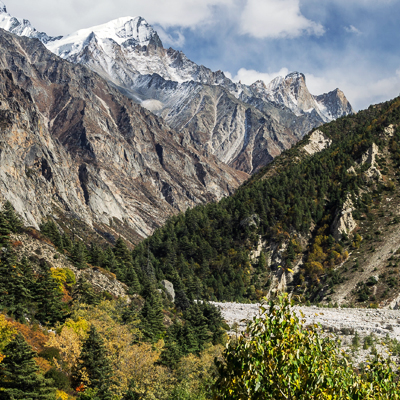 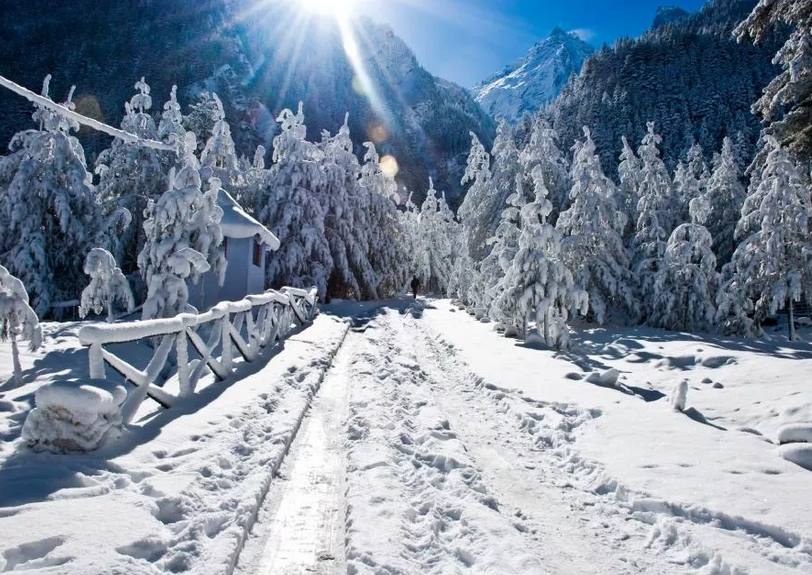 Enjoy the serene Himalayan beauty and divine, pristine natural environment of Bhairon Ghati in Uttarakhand. The perfect spot for a family holiday, a honeymoon trip for two, and an ideal destination for solo travelers and couples alike.

The best time to visit Gaumukh is in the month of September and June. It's from here that the glacier starts melting and it's from here that the river starts taking shape, which makes this a special place to visit at any time of year. But, if you want to experience Gaumukh at its best, you should visit between April and June and again between September and November. The winter months are too cold for a visit and rainfall makes transportation difficult during the monsoons, so if you want to see Gaumukh in all its glory, your only option is between spring, summer, and autumn.

Kedartal Lake Trek is a high-altitude mountain lake that symbolizes Lord Shiva and Taal. Lush green mountains, powerful glaciers, and the beauty of the Himalayas await you. This summer trekking in the Himalayas also offers campsites and snow-capped peaks.

Kedartal trek is a high-altitude mountain trek, giving you the opportunity to explore the natural beauty of the Garhwal region and bask in its bewitching flora and fauna. Along with its splendid beauty, Kedartal trek offers thrilling adventure to the trekkers.

Kedartal trek in Uttarakhand is an arduous trek through the mountains. It takes you to the breathtakingly beautiful Kedar Taal Lake and offers an opportunity to see snowy peaks. If you're looking for a spiritual experience in the mountains, Kedartal is perfect for you!

The Pandava Caves, also known as the Aravalem Caves, or the Pandava Gufa, was a place of refuge for the five brothers and their wife Draupadi from their enemies.

Know what you're getting into before you go! The Pandava Caves are a series of caves that the Pandavas used to hide from their enemies while they were on the run. You'll be going up a mountain and then hiking through a jungle, so make sure to wear appropriate shoes and bring water.

The unique component approximately the Tapovan treks is that those treks are very historical and religious, those treks we've got heard for hundreds of years that the sages and saints right here used to meditate and meditate at the Lord.

That is why nowadays the stunning circulate this is fading of the Ganges is likewise the presence of Bhagirath Ji, So on every occasion, you cross hiking to Gaumukh and Tapovan, you'll see and pay attention all this stuff from Gangotri itself. These treks are amazing, the weather and temperature right here; the climate make it very enjoyable. All-round is the sensation of peace

The lings are housed in a small enclosure next to the Ugra Narasimha statue, which is situated between the Royal enclosure and the Krishna temple. It's a large linga with a bottom that's generally submerged in water. The chamber emits a tiny amount of water movement. To do so, leave the main street and walk for roughly 30 meters.

It is necessary to visit this area in order to witness this natural extravaganza. The medieval temple of Stambheshwar Mahadev is located within the city of Kavi Kamboi. The Shrine is located in Gujarat, between the Arabian Sea and Cambay Bay.

Every day, during high tide hours, this Shiva Temple is submerged in water and reappears when the tide level falls. People from all across the United States of America have come to see this magnificent sight.

Trekking is a great way to explore the beautiful, scenic hills of Gangotri. It's best to start the trek early in the day as it can be difficult to find your way back at night. Trekkers should pack plenty of water for the trip and keep their eyes peeled for wildlife like wild monkeys and hornbills.

Journey at some stage in the trek desires a person skilled for the threat factors. In a few regions, the trek course will become so slippery, that it'll be unstable to climb without a guide. The complete land is included with snow and is right to trek withinside the month of April to November. You can face little problems in summer, for the reason that snows soften at that point to feed the Ganges. The Shivling can be there with the vertical pinnacle beside you, while Bhagirathi Peak stays as a large observer, as you attain the Gaumukh.